“We are here, not because we are law-breakers; we are here in our effort to become law-makers.”

This line from the famous speech “Freedom or Death” by Emmeline Pankhurst echoes a whole myriad of ideas, emotions and voices too. Following today’s trend of political correctness and self-discovery, every being has harvested within themselves their own ideas of the world, their own rules and their own feelings towards the milieu that surrounds. Who might have thought that this single line from one of the most empowering speeches made can be reduced down and mortified into such a, let’s befittingly call it, a scheme?

But there’s a reason for these self-conflicting revolts, these outcries for isolation.

Every word spoken, every word written, and maybe even every word being thought about is under the scrutinizing eyes of the news-hungry media wolves. Students are afraid to write, think or express themselves in fear of being abashed in the virtual world filled with impostors with an enriched knowledge about the civilization and its manifold cultures whilst lacking any form of social or cultural adroitness. You might have guessed it by now, the next few lines will be solely dedicated to weighing in the pros and cons of humanity’s greatest gift to himself(oneself, pause for political correctness). And the cons will be a little over-weighed just for the sake of one-sided arguments, to bring in the flavours of the social media platforms we all love and prefer. Everything is just a click away, or to be exact a touch away. From vast shelves full of wisdom to the words I just Googled to type into this blog, everything is available in this open shop of the world wide web. Everything is now either hacked, overdone or simply obvious and trite. But during these times, it’s our own responsibility to pull ourselves back up and get back on the tracks humanity was supposed to travel on.

TPH, a non-profit youth organization, of  KIIT University, had thus decided to do its part in lending the students a voice and also helping them get in touch with their judgemental abilities and thinking skills to achieve their goals and dreams all while working for a cause for a better tomorrow.

On September 29, 2018, The Phonetic House, the literary wing of TPH, in collaboration with Yoga Villa is the title sponsor, organized it’s first Open Mic event, tagged as Open Mic 1.0. To be fair, it was more of a celebration than a normal event. 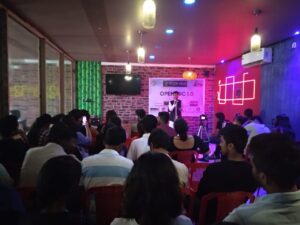 A celebration filled with laughs, cheers and at some moments a few drops of tears. Boys and girls poured in from schools and colleges from all over Bhubaneshwar to hear and also to be heard. The audience was both mesmerized and in awe by the spectrum of material and performances delivered by the score of participants who chose to get up and share their stories. The music performances which took place along with the poems and shayaris only added to the resplendence of the afternoon, there at the Frespresso cafe.

Everyone present there was filled with the essence of what this event was all about. The participants were bold, brave and they all spoke their hearts out into the mic in front. Some shared heartbreaks, some shared their views, some chose the be funny and lighten up the mood. But amongst all these performances one girl worthily outshined all others with her bravery and her courage to speak up about something which haunted her throughout her childhood, something which scares every girl or woman in our country something which people still aren’t “comfortable” enough to talk about. However, she chose to be different, she did her part to let people know, to try and bring about a change in our lives as well as our society. Thus, undoubtedly, the best speaker that day was Anushka Nayak of Loyla School, who made our open mic event even more special and gave another reason for it to be remembered. 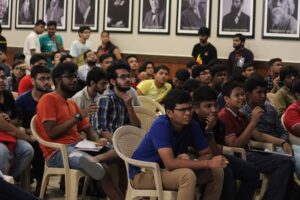 But TPH’s venture wasn’t quite over yet. The very next day saw the hosting of the annual quizzing competition of the society, Genquiz Khan II. This was a gala of its own. Unlike most other Sundays inside the campus, this one started early and in full swing as students from almost thirty different schools and universities, from all over the country journeyed to The KIIT International School, to participate in a first of it’s kind quizzing event aimed at lending out a helping hand towards the underprivileged and the deprived. More than a hundred teams fought it out through the preliminary round of questions to grab those six pairs of seats up on the stage. There the six teams were dealt with galvanizing questions by the quizmaster Lalit Mundhra, through seven rounds, which had the participants on the edge of the seats and hands floating over the red button. The audience was also equally involved with questions being thrown out to them in between rounds. The gusto and fervour lasted throughout the day as a team of boys from Jadavpur and IIT Khargapur grabbed the first prize.

KIIT University made it into the first runners-up, while Loyla School again proved their excellence by being the best girls team of the day. The evening ended on a high note as The Philanthropic Hand (the social service wing of TPH) was able to reach their goal to fulfil the cause it was meant to. 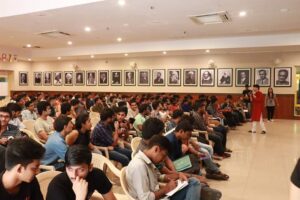 Needless to say, this event wouldn’t have been made possible without the constant support of our sponsors Tupperware and Print View.

As the weekend came to an end, it is befitting to end this post too with a small stanza from the poem delivered by Anushka herself.

I’ll talk to them about being strong,

I’ll talk to them about being wrong,

I’ll remind them how beautiful they are,

I’ll remind them how beautiful they are.”

Please consider supporting us by disabling your ad blocker